The Yonca-Onuk JV MRTP family has come to be closely associated with speed, and the company has raised the bar even higher with the MRTP16 in this regard. An MRTP16 Fast Intervention Craft reached a speed of 76.4 knots (141.50 km/h) while fully laden off the coast of Tuzla on 16 July, securing its position as the fastest vessel in its class. The second MRTP16 to be built under the same project reached even higher speeds with 76.8 knots (142.23 km/h) in its first cruise on 18 September.

There is no doubt that end users are today demanding vessels that can carry out time-critical tasks at high speeds. The vessels in the same class as the MRTP16 can reach speeds of around 50 knots, while in the 60 knots band, it is not possible to find craft with a similar payload.

The first of the two MRTP16 Fast Intervention Craft that have been built and tested for the Omani Police Forces reached a speed of 76.4 knots (141.50 km/h) during fully laden speed tests on 16 July, while the second reached a speed of 76.8 knots (142.23 km/h) during its first test, sending a clear message to security units that need speed for time-critical tasks: “This is the solution you are looking for!”

The high speeds achieved by the MRTP16 are without doubt not only attributable to the power of the main engine, as several technologies, engineering analyses, design decisions and implementations within the manufacturing process also play a role, from the beginning of the design process to final production.

Designing and building platforms that can reach high speeds requires unique solutions, involving years of effort and work in different disciplines. Yonca-Onuk JV adds its long-standing corporate technical memory and 20 years of investment in advanced engineering tools to its experience working in compliance with aviation and automotive sector standards, and ensures the transfer of this know-how into the future. All design activities for the vessel were carried out indigenously at the Yonca-Onuk JV shipyard.

The MRTP16’s body shape contributes significantly to its acceleration, for which technical improvements were made to reduce underwater and aerodynamic resistance. The MRTP16 has a deep-V single-hull, identical to other Yonca-Onuk JV platforms, ensuring high speeds and allowing compromising maritime effects at high speeds to be avoided. Aside from the hydrodynamic advantages this form brings, it also facilitates safe and comfortable cruising. Consequently, the crew are affected only minimally by the movement of the sea and the ship at high speeds, and their mission readiness is thus assured.

The hull is made of glass, Kevlar and carbon fibre, combined with a special resin system applied with a vacuum injection method. The mechanical strength of the materials can be increased to the highest possible values thanks to the manufacturing method developed by Yonca-Onuk JV using its own means.

Thanks to the unique solutions that Yonca-Onuk JV designers have brought to the structural design side, the company is able to develop solutions that provide structural weight savings by utilising the full potential of the material. MRTP-series boats offer outstanding performance thanks to the saved weight and optimised positioning of the payload aboard the boat, and the light and stable structure of MRTP16 supports the craft in achieving high speeds.

The final factor that enables the MRTP16 to reach such high speeds is the drive and propulsion system, which comprises two powerful diesel engines incorporated with a common rail fuel injection system. The Arneson Surface Drive propulsion system and a specially designed surface propeller system complement the MRTP16 design.

The MRTP16 not only provides high speed to its users, but also serves as a trustworthy fully mission-capable platform, just like the 168 members of the MRTP product family that have proven their capabilities in the field, serving in different seas and with different mission profiles.

Yonca-Onuk JV provides close support to its end users throughout the life-cycle of the boats. The company has been continuously improving its user training curriculum since 1997. In addition to the personnel ship-handling training, given both in port and at sea, safety of life at sea and fire and damage control trainings can be given with the support of specialised institutions and organisations, if requested. training in the use of the devices aboard the boat is given prior to the delivery of the boat, which allows the end user to maintain the craft at various levels in their own facilities.

MRTP16s can be found in the inventories of five different authorities in four countries. A total of 56 MRTP16 craft are cruising the seas around the world, serving in reconnaissance-surveillance, search and rescue, anti-smuggling, medical evacuation and inspection missions, among others. This number will increase to 58 with the delivery of the two boats to Oman.

The first MRTP16 was delivered to the Turkish Ministry of Health in 2005, which purchased four vessels in total, after which, the Turkish Directorate General of Customs Enforcement purchased four craft, and then MRTP16s entered in the inventory of the Malaysia, Qatar and United Arab Emirates.

Throughout this process, the MRTP16 has continued to develop. As a result of the advances made by Yonca-Onuk JV since 2005 in its manufacturing methods and its design capabilities, as well as the changing requirements, the latest design differs from the first configuration in 2005 by 74 percent.

Yonca-Onuk JV is constantly updating the design and configuration of the entire MRTP family to meet changing needs, while observing and implementing new material technologies and manufacturing methods. To this end, it tests class-approved materials in the composite mechanical strength laboratory within the shipyard, and makes use of these materials on its platforms based on its evaluations. Recently, a new design parameter has emerged as a result of the COVID-19 outbreak, requiring the same volume of work to be carried out with fewer staff in the same amount of time. The company has also started using common rail diesel engines due to their ability to perform better, especially in higher air and sea water temperatures, on its platforms.

Despite the pandemic that has swept around world, Yonca-Onuk JV is continuing its projects with priority given to the health of its employees. The company completed construction and delivered its MRTP24/U New Special Operation Crafts and MRTP12 Fast Patrol Boats to Turkish Naval Forces Command this year, and delivered the MRTP20 Improved Fast Intervention Craft to the Qatari Emiri Navy, all the while continuing construction in its other ongoing projects.

Yonca-Onuk JV officials have clarified the main focus of their works for the future: “We will continue to look for perfection through continuous and persistent research and development efforts. We know that our ability to learn faster than our competitors can be the only persistent advantage we can maintain against them.”

Under what Circumstances is It Fastest?

Special boats built only for speed can reach speeds of 100 knots and above. However, this speed can be achieved only under specific conditions, as these boats are designed only for speed, and are unsuitable for any other purpose. In addition, the annual usage of these boats is very limited, and so many design challenges and constraints are eliminated.

Mission craft such as the MRTP16 are designed to operate for over 1,000 hours a year while carrying a wealth of mission equipment, and to perform different tasks, including evacuations of people in emergency situations. For this reason, they need to be equipped with navigation systems, ballistic protection, weapons systems and other mission equipment, and under these conditions, achieving a maximum speed in the 76–77 knots band under full load can be considered a much greater achievement.

BeNova Consulting Keeps Its Finger on the Pulse...

Yonca-Onuk JV is Taking Its First Steps in...

TUALCOM Aims to Expand Its Domestic and Foreign...

Roketsan Commenced a Landing at IDEF with Plenty... 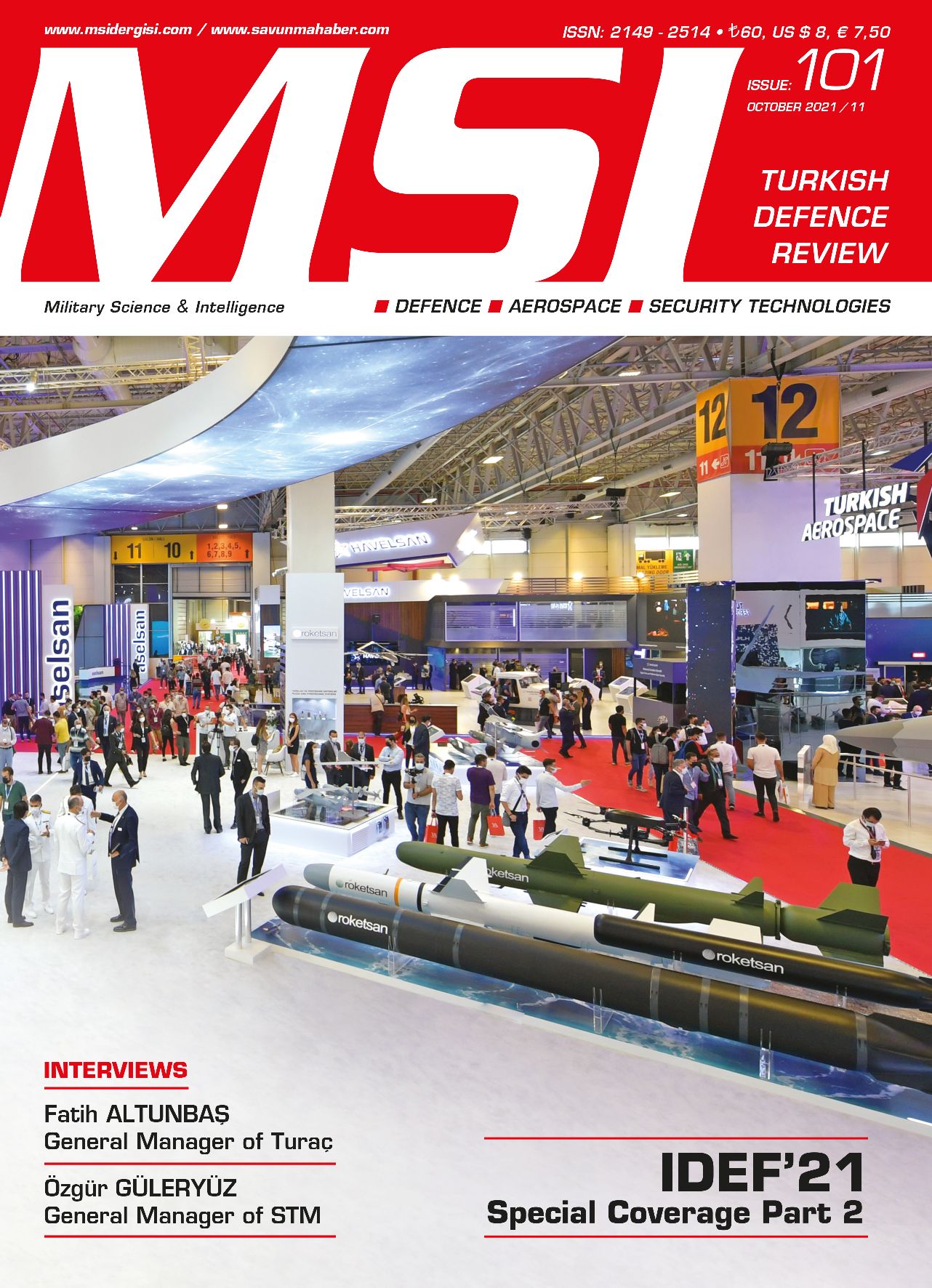 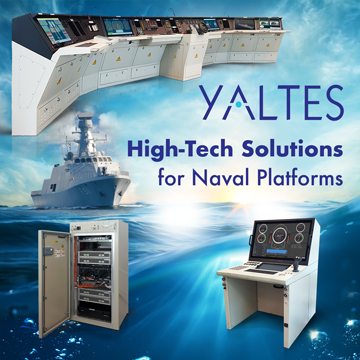